SCOTTSDALE, Ariz. | The sustained heat of the desert had subsided at twilight when Dr. Leah Brown found a dinner spot on the edge of this resort town. Scottsdale is named for General Winfield Scott, the U.S. Army’s longest-serving general, and the man who oversaw the expulsion of the Cherokees from Georgia, which is not a pretty story.

Yet on this evening in Scottsdale, where both the atmosphere and the conversation were cool, Leah’s guests felt privileged to be in her company.

She’s an orthopedic surgeon with credentials that continue to gather momentum. Where she has been and what she has accomplished turns heads, but leaves one keenly aware that the best is yet to come. In your mind’s eye, you see her brilliant performances for the University of Georgia gymnastics team (a 14-time event All-American) and you reflect on her résumé, which speaks to medical excellence, altruism, character and service above self.

Her mother integrated the Charlotte, N.C., school system. Ergo, she knows the thrill of victory; she knows the agony of defeat. However, the cruel world has met its match in this remarkable and versatile UGA graduate. She volunteered for two tours in the Middle East. Let it be known that she didn’t have to go. She doctored the wounded and dying – not just the victims, which often included many of her friends, but the perpetrators, the bad guys, as well. 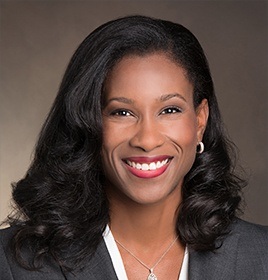